You can try the example here:
http://geocoder.cit.api.here.com/6.2/geocode.xml?searchtext=425+W+Randolph+Street+Chicago&gen=7&app_id=DemoAppId01082013GAL&app_code=AJKnXv84fjrb0KIHawS0Tg 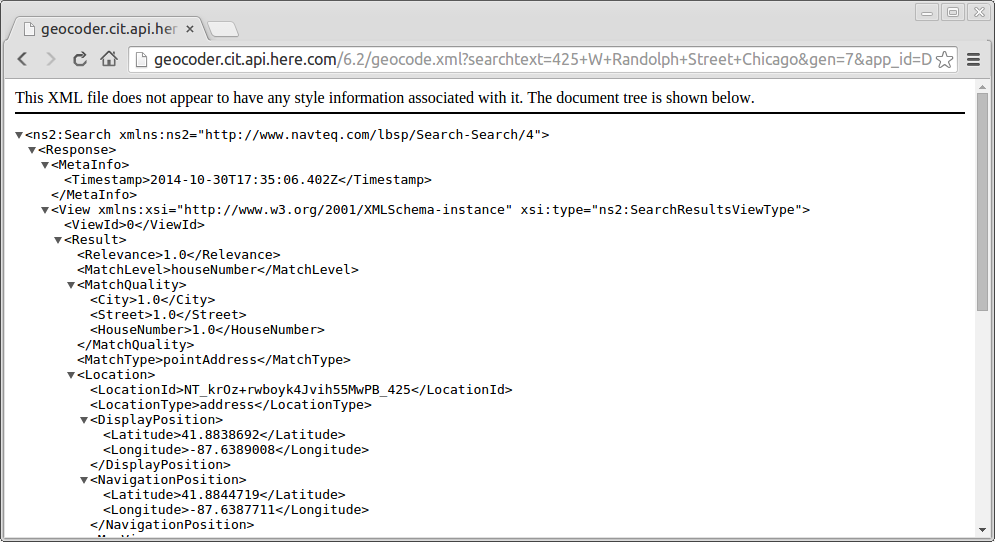 This example show how to parse the returned XML on Android. 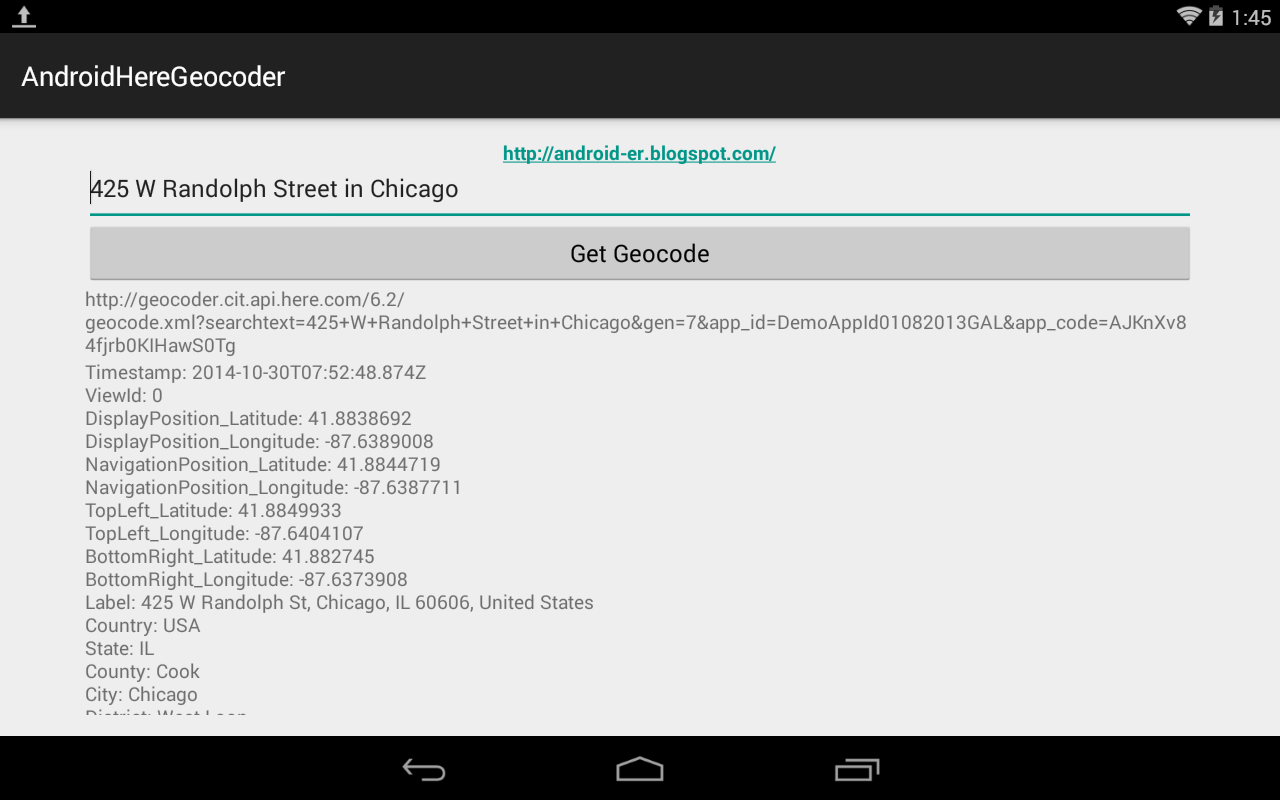 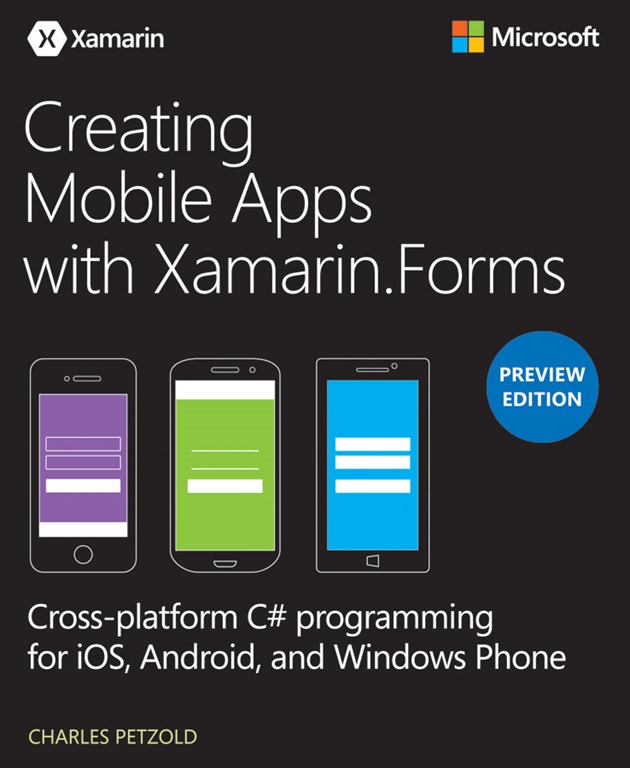 Free ebook, Creating Mobile Apps with Xamarin.Forms, Preview Edition, is about writing applications for Xamarin.Forms, the new mobile development platform for iOS, Android, and Windows Phone unveiled by Xamarin in May 2014. Xamarin.Forms lets you write shared user-interface code in C# and XAML (the eXtensible Application Markup Language) that maps to native controls on these three platforms.

This free ebook (PDF and Mobi) can be downloaded HERE.

This ebook is a Preview Edition because it's not complete. It has only six chapters.

In this example, we show how to display Here map of Base Map, Aerial and Traffic Tile.

HERE Map Tile API is a RESTful API that retrieves map images for all regions of the world. To get a map image, formulate a request that combines the URL and a set of parameters to specify details such as position, format, zoom level, map type of the map image. You can embed the resulting map image in web pages and applications.

The Map Tile API serves map tiles obtained by mapping points on the surface of a sphere (the globe) to points on a plane, using the normalized Mercator projection.

It's a example of using HERE Map Tile REST API on Android (not Native SDK). 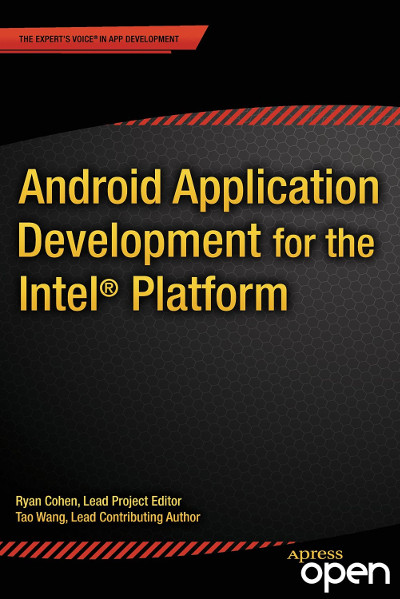 The increase in Android devices featuring Intel processors has created a demand for Android applications optimized for Intel Architecture: Android Application Development for the Intel® Platform is the perfect introduction for software engineers and mobile app developers. Through well-designed app samples, code samples and case studies, the book teaches Android application development based on the Intel platform—including for smartphones, tablets, and embedded devices—covering performance tuning, debugging and optimization. 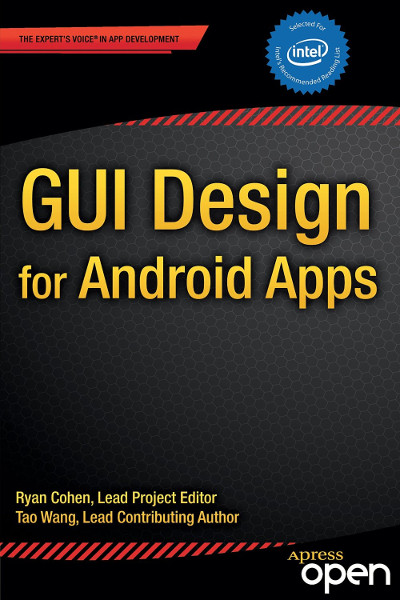 is the perfect—and concise—introduction for mobile app developers and designers. Through easy-to-follow tutorials, code samples, and case studies, the book shows the must-know principles for user-interface design for Android apps running on the Intel platform, including smartphones, tablets and embedded devices.

This book is jointly developed for individual learning by Intel Software College and China Shanghai JiaoTong University, and is excerpted from Android Application Development for the Intel® Platform.

Create, accessorize and share Android characters that look like you, your best friend, your Uncle Sal... anyone, really.

With 25 new animations, you can make them laugh, dance, cheer, rock out, or all sorts of other moves.

You can also send your animated Android characters in texts or chats as emoticons. Or share them as animated GIFs and pics. So work it, people! Show the world how you roll.
And don’t forget to submit your creations to the Androidify.com Gallery where they can hang with Android characters from around the world and possibly be selected to appear in the new Android advertising campaign.

This example show how to load Here map image, using REST API (not Native SDK). HERE, a Nokia company, is a global leader in the mapping and location intelligence business. 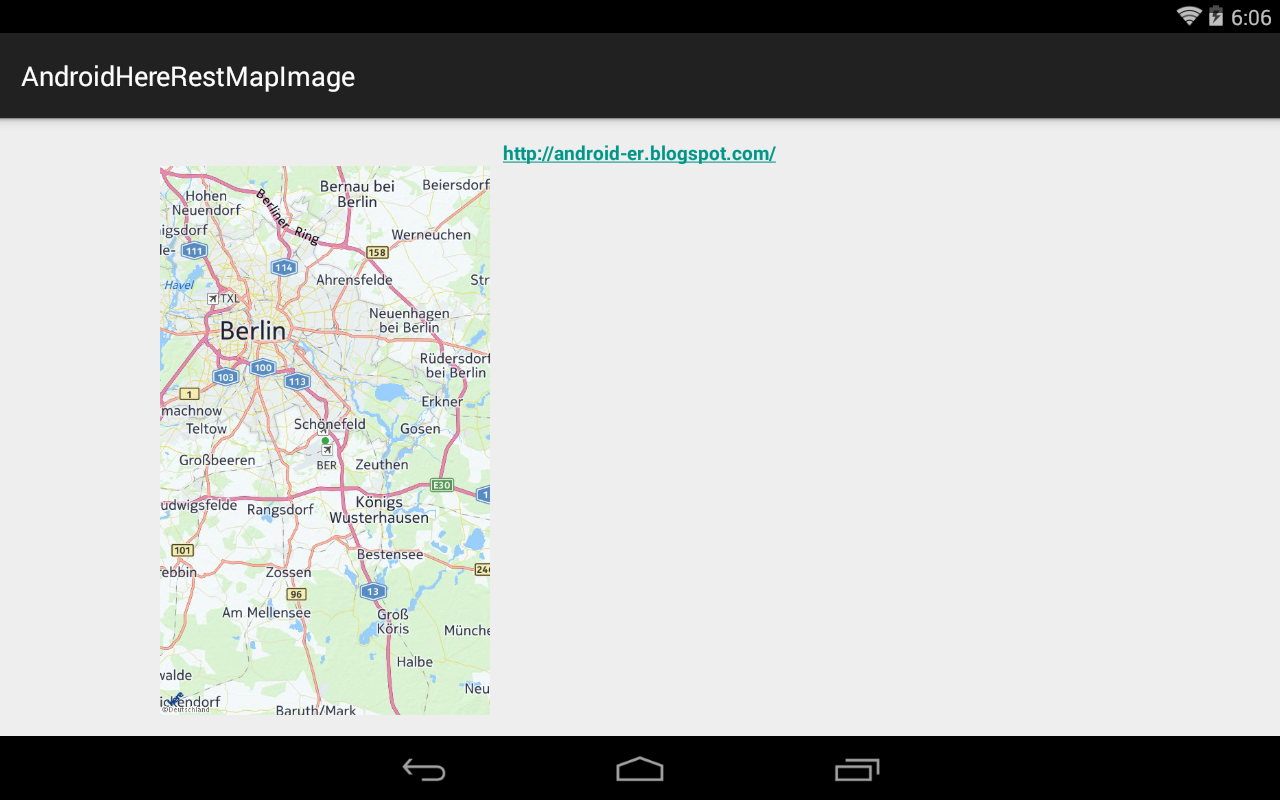 app_id and app_code are authentication credentials. You can use the demo credentials in the examples for testing, but must substitute them with your own unique values in your website or application. See Acquiring Credentials for more information.

HERE offers fast, accurate maps that are always ready to use, with or without an internet connection. Search for places, find routes and get turn-by-turn voice guidance wherever you are. Underground, on holiday, or even in the middle of nowhere: HERE just works, always. 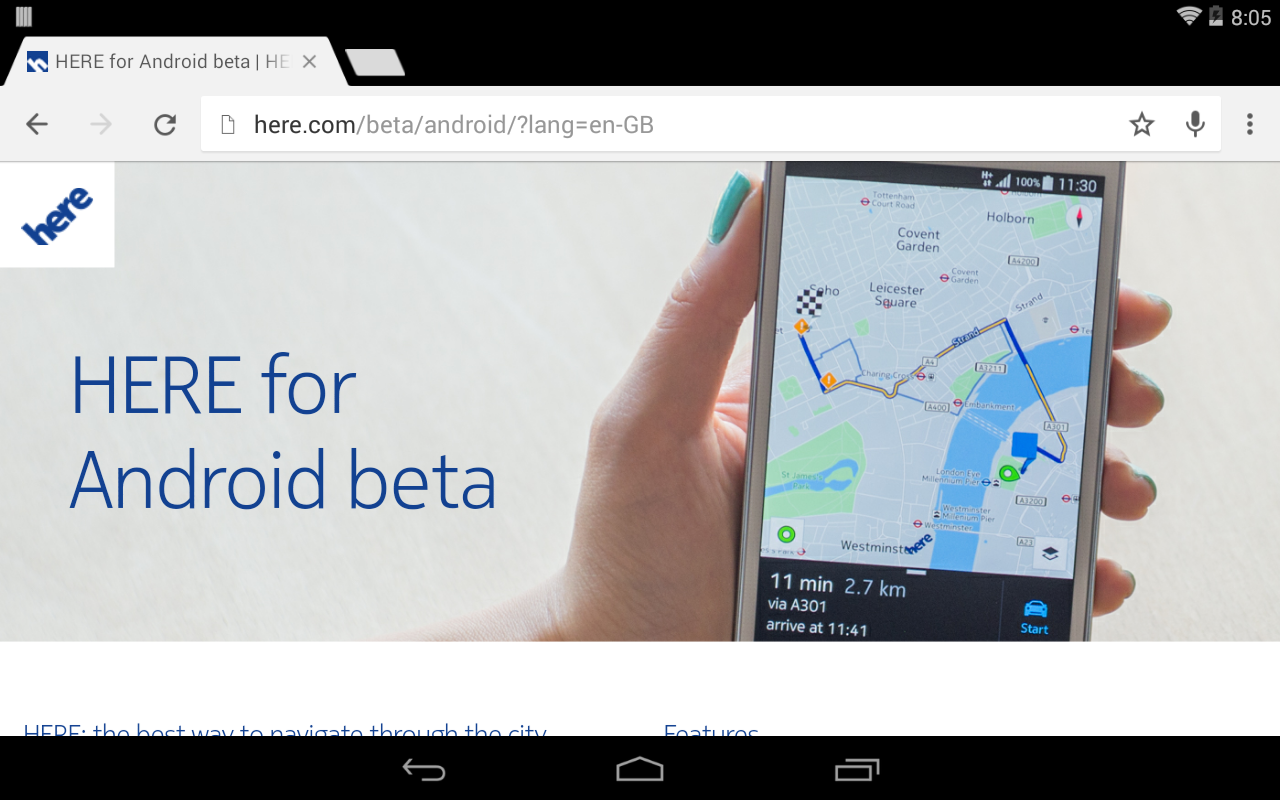 Features
Please note that this is a beta version of the application that is stlil undergoing final testing. It is a known issue that using a cache cleaner on your phone may disable navigation voices. We're investigating and will release an update soon.

[Remark: Somebody comment that "something strange happens, do not let login with credentials in the mobile app, only on the website"]

How it install and run on Nexus 7 (1st generation), without sign-in:

Android 5.0 (API 21) SDK available now, you can update it with SDK Manager. 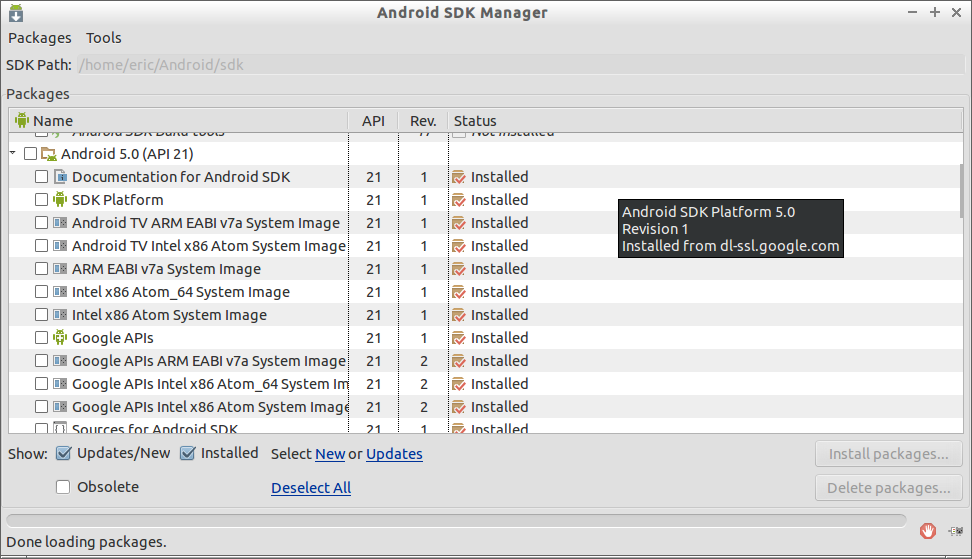 Refer to my old example "Add and Remove view dynamically", the new views will be clean after orientation change. This post show how to save and restory data in onSaveInstanceState() and onRestoreInstanceState() to keep the views. 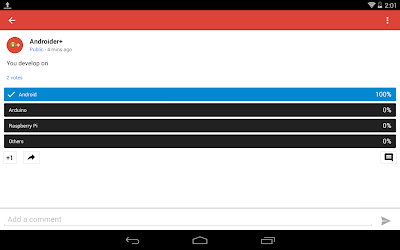 Google Executive Chairman and ex-CEO Eric Schmidt and former SVP of Products Jonathan Rosenberg came to Google over a decade ago as proven technology executives. At the time, the company was already well-known for doing things differently, reflecting the visionary--and frequently contrarian--principles of founders Larry Page and Sergey Brin. If Eric and Jonathan were going to succeed, they realized they would have to relearn everything they thought they knew about management and business.

Today, Google is a global icon that regularly pushes the boundaries of innovation in a variety of fields. HOW GOOGLE WORKS is an entertaining, page-turning primer containing lessons that Eric and Jonathan learned as they helped build the company. The authors explain how technology has shifted the balance of power from companies to consumers, and that the only way to succeed in this ever-changing landscape is to create superior products and attract a new breed of multifaceted employees whom Eric and Jonathan dub "smart creatives." Covering topics including corporate culture, strategy, talent, decision-making, communication, innovation, and dealing with disruption, the authors illustrate management maxims ("Consensus requires dissension," "Exile knaves but fight for divas," "Think 10X, not 10%") with numerous insider anecdotes from Google's history, many of which are shared here for the first time.

In an era when everything is speeding up, the best way for businesses to succeed is to attract smart-creative people and give them an environment where they can thrive at scale. HOW GOOGLE WORKS explains how to do just that.

Email ThisBlogThis!Share to TwitterShare to FacebookShare to Pinterest
label: Books (others), Google 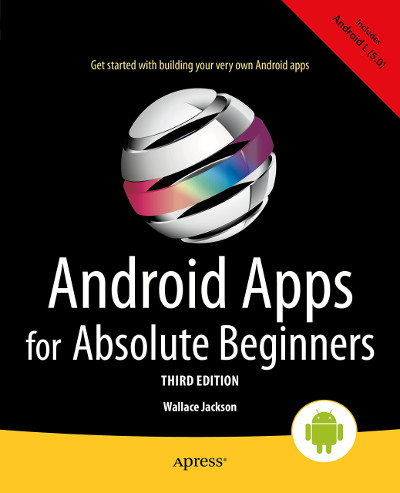 Anybody can start building multimedia apps for the Android platform, and this book will show you how! Now updated to include both Android 4.4 and the new Android L, Android Apps for Absolute Beginners, Third Edition takes you through the process of getting your first Android apps up and running using plain English and practical examples. If you have a great idea for an Android app, but have never programmed before, then this book is for you.

This book cuts through the fog of jargon and mystery that surrounds Android apps development, and gives you simple, step-by-step instructions to get you started.
This book covers both Android 4.4 (KitKat) and Android L, but is also backwards compatible to cover the previous Android releases since Android 1.5.

What you’ll learn
Who this book is for

If you have a great idea for an Android app, but have never programmed before, then this book is for you. You don’t need to have any previous computer programming skills—as long as you have a desire to learn, and you know which end of the mouse is which, the world of Android apps development awaits!