ExoPlayer is an open source media playback library for Android. Used by thousands of applications, it enables great media experiences and can be customized to suit individual needs. Recent additions to the library have ranged from a new high level API to advanced features such as multi-period DASH support and spatial audio. In this talk you’ll learn what’s new in ExoPlayer, as well as some of ExoPlayer’s key concepts, points of customization and inner workings.

Email ThisBlogThis!Share to TwitterShare to FacebookShare to Pinterest
label: ExoPlayer

Set background and alpha of EditText

Examples of Setting background and alpha of EditText: 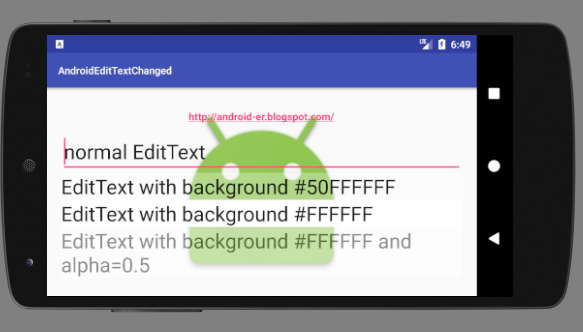 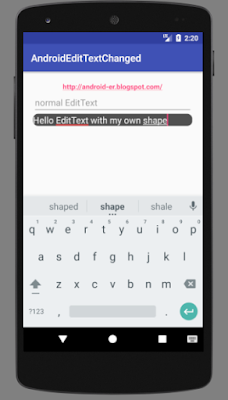 To create EditText with our own shape, create a drawable XML to define our custom shape:


Reference my shape in layout xml: 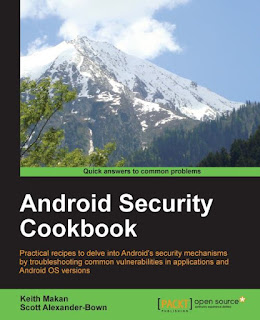 Ensure your apps are as tight as can be from outside threats with this cookbook. With recipes you can take to newer versions when needed this 350 page download shows you how to catch the trickiest vulnerabilities before they become a problem and gives you, and your customers, the peace of mind you deserve.

Email ThisBlogThis!Share to TwitterShare to FacebookShare to Pinterest
label: Books for Android development, Books for FREE

AutoCompleteTextView is a subclass of EditText that shows completion suggestions automatically while the user is typing.


To implement AutoCompleteTextView in your app:

Add the AutoCompleteTextView to your layout:

Edit res/values/strings.xml to add array that contains all text suggestions.

Set adapter using the string array for the AutoCompleteTextView

Another example of TextWatcher to monitor text changed in EditText

This example implement TextWatcher for EditText, such that we can detect user action on EditText, no extra "Enter" button is need.


Next:
- Another example of TextWatcher to monitor text changed in EditText

MUST SEE:
Introducing Android vitals, a guide to better app and games performance that helps drive engagement and installs. 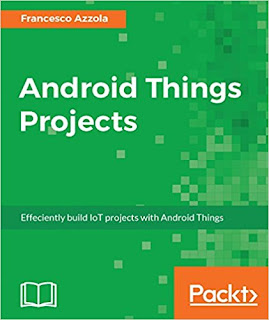 With this book, you will be able to take advantage of the new Android framework APIs to securely build projects using low-level components such as sensors, resistors, capacitors, and display controllers. This book will teach you all you need to know about working with Android Things through practical projects based on home automation, robotics, IoT, and so on. We'll teach you to make the most of the Android Things and build enticing projects such as a smart greenhouse that controls the climate and environment automatically. You'll also create an alarm system, integrate Android Things with IoT cloud platforms, and more.

By the end of this book, you will know everything about Android Things, and you'll have built some very cool projects using the latest technology that is driving the adoption of IoT. You will also have primed your mindset so that you can use your knowledge for profitable, practical projects.


About the Author
Francesco Azzola is an electronic engineer with over 15 years of experience in computer programming and JEE architecture. He is SCEA certified (Sun Certified Enterprise Architect), SCWCD, and SCJP. He is an Android and IoT enthusiast. He loves creating IoT projects using Arduino, Raspberry Pi, Android, and other platforms.

He is interested in the convergence between IoT and mobile applications. Previously, he worked in the mobile development field for several years. He has created a blog called survivingwithandroid,where he shares posts about coding in Android and IoT projects.


by： Erik No comments: 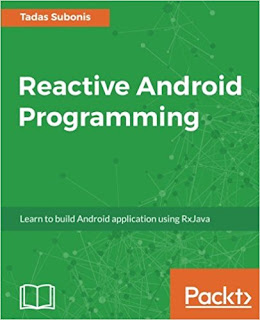 Make the most of asynchronous android programming


Who This Book Is For
Are you an android developer trying to figure out how to use reactive paradigm for your programming needs? If yes then this is the book for you. No previous knowledge of RxJava is required.

What You Will Learn


In Detail
Writing code on Android is hard. Writing a high quality code that involves concurrent and parallel tasks is even harder. Ensuring that this code will run without unforeseen race conditions is an the order of magnitude harder. RxJava is the tool that can help write code for such tasks.

In this book a novice developer will be introduced to a wide variety of tools that RxJava provides to enable them to produce robust and high-quality code for their asynchronous tasks by building a relatively simple(and high quality) application using advanced RxJava techniques to produce a high quality product.

Part 1 of the book will lead the developer through RxJava's initial setup in Android environment. In Part 2, the reader will learn RxJava 2.0 step-by-step by starting off with stock data processing and display.The developer will learn to choose appropriate Schedulers and to use Retrofit library for remote requests.In Part 3, the reader will also learn advanced topics such as adding integration to Twitter to process its streaming data by combining it with stock data.

Style and approach
This book is a step by step practical guide which will essentially teach you to set up, implement, and debug Reactive Android Code with ease.